“Our hurts unite us. They define us. They make us not only human, but a family.” Billy Coffey 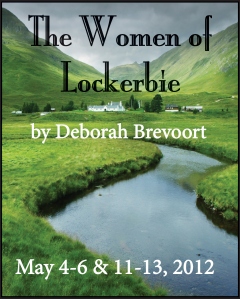 On December 21st, Pan Am’s Flight 103 exploded after leaving Heathrow Airport in London for New York. All 259 people onboard were killed, and 11 more on the ground died as the wreckage fell to earth in Lockerbie, Scotland.
Years later among the hills of Lockerbie roams an American mother looking for the remains of the son she lost in the crash of Pan Am Flight 103.  She is accompanied by her husband, who has kept things together through the required acts of finality that accompany a death, at the expense of his own grief.
The couple encounter the Women of Lockerbie, who are striving against the U.S. Government over the disposition and possession of the clothing found among the crash ruins. They are determined to convert the act of hatred into an act of love by washing the clothing pieces and returning them to the families of those killed.
Playwright Deborah Brevoort wrote The Women of Lockerbie in the structure of a Greek tragedy. The fictional work, though loosely inspired by true events, is a poetic drama about the triumph of love over hate.  It’s powerfully packed with the raw emotions that accompany grief and loss and examples of the individuality of how we walk through it.
Presented by all for One productions, inc. at the Allen County Public Library Auditorium in downtown Fort Wayne, The Women of Lockerbie runs through May 13th.  Tickets may be obtained by calling (260) 622-4610.
Ponder & Chat: When was the last time you were emotionally moved by a play or movie? What was the underlying theme that touched you? How did it relate to your own life story or life lessons?